You are here: Home / Cantate Domino

Cantate Domino Sing to the Lord a New Song (or play it on your harp?)

Here is the second track on the 1936 record Rythmique Grégorienne, uploaded to YouTube by Folklore Québécois and reissued by Sony-Universal on a four-CD set in 2011. The Introit Cantate Domino is sung by the Benedictine monks of the Abbey of Saint-Benoït-du-Lac, Quebec, Canada:

Below you can see a page from the 1948 book Rythmique Gregorienne with chironomy markings above the Gregorian notation. This is part of the music score for the above track.

Chironomy and neumic notation with Latin text for the Introit, Cantate Domino
from the book Rythmique Grégorienne, by Dom Georges Mercure, O.S. B., 1948.

Chironomy is the art of conducting Gregorian chant choirs. Here, the swirling lines above the neumic notation tell the choral conductor how to direct his singers. It is a different art from orchestral conducting. Rhythm is not observed in the same way as Western European classical music nor in contemporary popular music. It does have a beat of a sort – but whole volumes of academic treatises have been written devoted to the subject of Chant rhythm and how it differs and how it should be sung (there are numerous scholarly camps of division on this latter topic alone).

Also note the presence of the traditional dynamic markings, common in modern music scores that indicate raising and lowering the singers’ volume.

I found the best way to play this piece on my wire harp was to have the material in both modern notation and Gregorian for comparison purposes, and to listen to the recording a few times through before attempting to play it. When I did so, I tried to focus on phrasing, much the way the singers would. It was helpful to draw phrase markings on my transcriptions (I didn’t copy the chironomy, although it gives me a sense of ideal volume at certain points, phrasing and overall rhythmic structure). At this stage I also didn’t try to harmonize the chant nor work out harp arpeggios, ornaments, etc. but simply stayed with the melody and made sure I got that right before moving on to anything else. It takes a little while for the piece to settle in and become familiar.

On my next post I’ll talk a little bit about modes and keys and transposition… and harp tuning, of course! 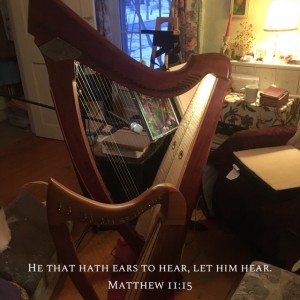