You are here: Home / About my harps

Published by Sherri Matthew on January 12, 2023

Welcome to those of you who came here after clicking the link in our Weekly Digest! This is a WordPress blog I’ve been maintaining on and off and I hope to continue writing occasional material for our weekly church newsletter with a link to here if there’s interest. 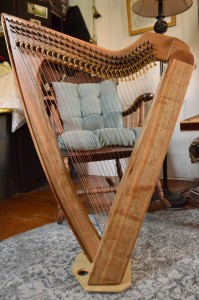 My new harp at home.

I’ve enjoyed playing my harps for you on Sunday mornings and I hope you’re enjoying them too. If you’re wondering a bit about them, here is a brief intro: they’re not like most harps you may have met in the past. Wire strung harps are a kind of rare unicorn in the harp world. They’re not the classical music harps you see in orchestras. And they’re not the “Celtic” harps you sometimes read about in area musical events. So, what makes these particular harps different?

First of all, they are strung with wire. Not nylon strings, which is the case with the popular Celtic harps. So they are at very high tension (thousands of pounds of pressure) and are specially reinforced to withstand this force without being damaged. The small Irish harps you may have seen being played at your local farmer’s market or folk music concert would be severely damaged within a few minutes from the sheer tension that these strings put on the instrument! 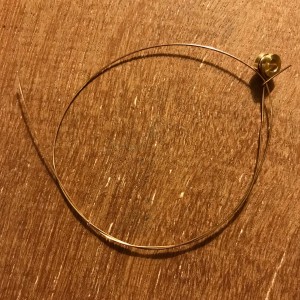 Copper-Phospher-Bronze alloy harp wire with end toggle to keep the string from pulling up through the soundboard.

Secondly, they are all custom built to order. They’re not off the shelf, bought from Amazon, etc. On average they take a year to be built, with my most recent harp having taken two years! The people who build them are small family business owners in the U.S.A, with typically 30 years of experience, very large woodworking shops, family employees and offering apprenticeship programs to promising young people interested in a vocational/entrepreneurial career. They frequently started off as fine cabinet makers before transitioning to making musical instruments. Each builder has his own unique approach to crafting an instrument and works closely with the commissioning harpist on how the final harp should turn out. 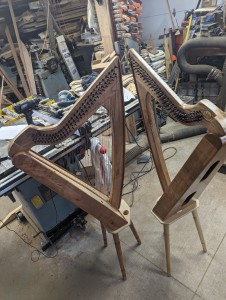 The harp I play each Sunday in the workshop of Argent Fox Harps, Kirkwood, IL.
The harp on the right is for another customer.

They also consult with string makers, who calculate what is known as a “string band”, that is the array of wire strings that will work correctly with the ratio of neck curvature and proportions of the instrument… and not break when being brought up to full tune! The string makers are also long-established family businesses. They will readily supply replacement strings as needed should any break.

These harps are modern interpretations of medieval Irish and Scottish harps. They have many contemporary (and useful) features not found on 14th and 15th century harps. The basic shape is the same but there have been many significant design updates offered by builders in the last few decades to allow harpists to play a wider range of musical literature on them.