In 2015 my second Irish wire harp was built for me by Gary Stone of Stoney End Harps, Red Wing, MN. His Esabelle model is normally strung with nylon strings, and accordingly is lightly built. 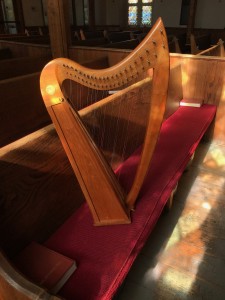 When I asked Gary to build this harp as a wire model, a lot of things needed to be changed to accommodate the significantly higher tension of wire strings. The body of the harp is reinforced and the string band is different from the nylon set that is regularly used. For this he consulted with his string maker and after several tries, developed a custom set of wires that would work on this harp. The harp is tuned to A415, not the standard A440, to prevent string breakage at that tension. It is now 2022, and knock on her walnut soundboard, she has not broken a single string in all the time I’ve had her!

Playing this type of harp requires a hybrid set of skills… the damping/fingernail technique of Irish wire harp playing, plus the awareness of the cross-strung geometry that is different from a conventional harp. There are two ranks of strings here, not one: 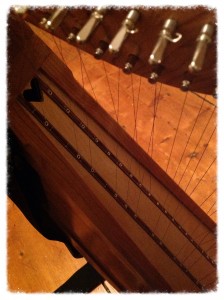 When I first started learning to play Esabelle I discovered very quickly that the few method books on the market dedicated to learning to play cross-strung harps were really suited to conventional nylon-strung ones… they didn’t address the unique damping requirements of wire, the need to have fewer notes ringing at any given time (these harps have a very bell-like sonic quality) and lastly, that one is more likely to use a medieval fingering technique (three fingers, not four) with the narrow string spacing. Arrangements and study pieces suitable for nylon-strung cross harps would have thick harmonies, stacked chords, scales and arpeggios that were fingered for four fingers not three, etc.

One of the best books I found that really helped me to learn to play the wire version of Esabelle is O’Neill’s 1850 book of Irish fiddle tunes and his Dance Music of Ireland. Although the tunes are intended for playing on the fiddle, they lend themselves remarkably well to Irish harp. Most of them are in the key of G (one F#, so only one chromatic string to deal with) or if you want to challenge yourself, many are in the key of D (F# and C#, two chromatic strings and you’ll find yourself slowing down a lot at first while you try to find them! And damp them appropriately!) There’s a few in the key of F, my favorite key, with a Bb, which for some reason I find easy and comfortable to play.

So in short, I learned to play wire-strung Esabelle on my own, developing my own way to play her, based on my previous harp experience and studies in Early music and traditional folk music. 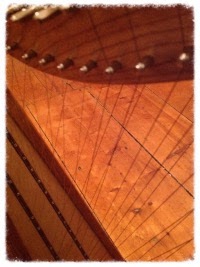 So no sharping levers are needed. Just a different way of playing: reach up or down with one finger to get the sharp or flat note you need. And remember to stay in the middle of the harp! On my Luna harp I tend to play close to the soundboard because it resonates nicely that way. When I’ve been playing that instrument for a while and come back to Esabelle I tend to forget the geometry is different.

At the end of this month (or maybe sometime next) I hope to be seeing my third wire harp, a double-strung, built by Dan Speer of Argent Fox Harps. This unique harp will have two parallel rows, (also called ranks) of strings, with a full set of sharping levers on either side. Again, nylon strung versions of this type of harp are quite common and so are the method books, but they are seldom found in wire and I have not found any tutorials on the subject.

The traditional harp of Ireland was wire-strung for millennia… in the 21st century we’re blessed to have innovative, imaginative harp builders who are willing and able to build new instruments, with expanded capabilities that allow us to learn along with them, as our new harps teach us how to play them!