You are here: Home / New to the Wire Harp? 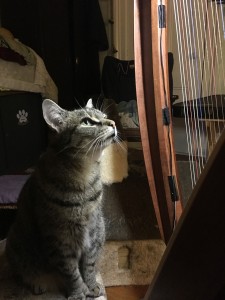 If you’ve just discovered the wire harp (or heard one being played), for starters it’s good to know that most folks in the overall world of harps (Classical, Celtic) tend to think of historical Irish wire-strung harp when this branch of the harp family comes up. That is, replica instruments of period harps made in Ireland sometime during the 1600’s and 1700’s and the accompanying music repertoire, e.g. O’Carolan, etc.

These harps are small, have no sharping levers and are diatonic: think playing in the key of C if you are familiar with the piano. No sharps or flats. To extend this analogy to the piano, you can only play music that doesn’t use the black keys. Unless of course, you stop and retune the harp to a different key, say F. Then you would get a Bb in there. But modulation to another key, like E Major, would be impossible. 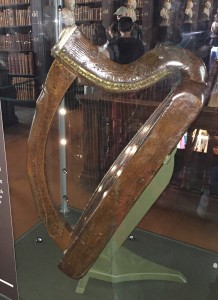 Around 1830 or so, or just before then, maybe in the late 1790’s, the old diatonic Irish wire-strung harp was beginning to die out. Its replacement? The new concert pedal harp, which made changing keys possible. But it was not a wire harp, with the beautiful, singing ringing tones of wire. It was really a different kind of harp altogether… the concert pedal grand that most people think of when you say “harp”. The orchestra harp. 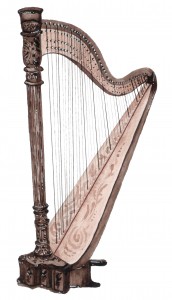 However. In the world of wire harp there is another branch, albeit a small one. Contemporary wire-strung harps make no pretense to being historic replicas of an instrument from any period in the past. Instead, they look to the future, with their structural design emphasizing flexibility to accommodate today’s music. Certainly they can play the music of the past very well, but they allow instead for the growth and development of a long tradition, now being able to play sharps and flats, thus opening the door to a much wider array of music you can play on them. 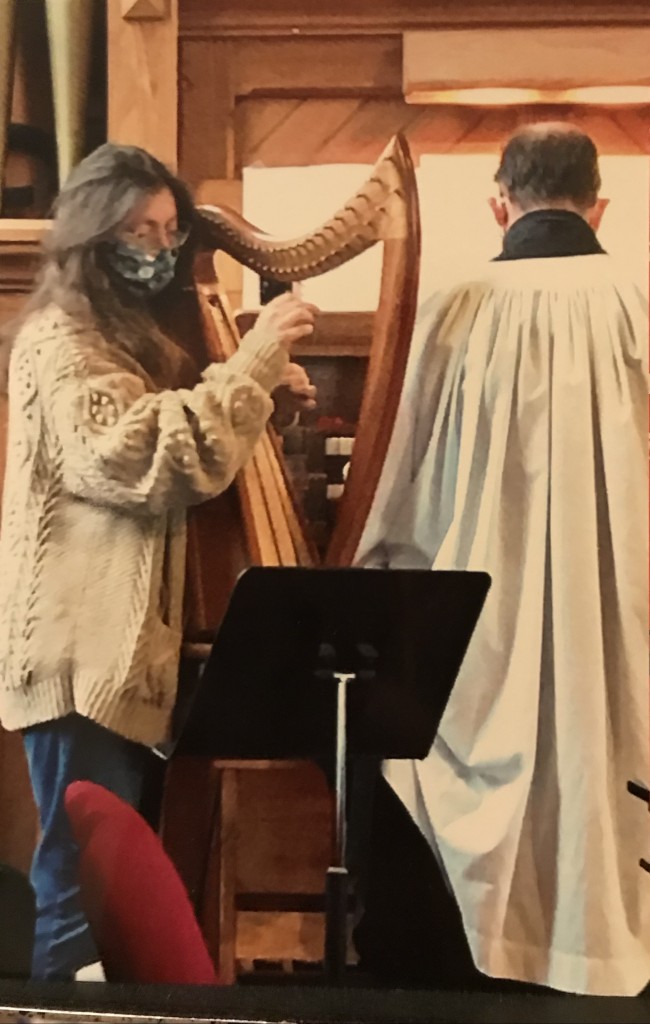 Here I am playing my cross-strung wire harp with husband George at the pipe organ, Sunday services at St. Stephen’s

They have sharping blades or levers. They are cross-strung. They are multi-rank (more than one set of strings, each with a set of levers). The possibilities are endless.

For just getting started though, you will probably want to stay in the realm of the diatonic and move on to sharps and flats (chromatics) after you’ve learned the basics. There are a number of issues in playing wire strings that make things quite different from a nylon-strung Celtic harp or indeed, a concert pedal grand. For the most part, they’re played with the fingernails – usually – and there is a whole art form in learning to correctly damp with the finger pads because the strings have a very long ringing sustain. If the strings are not damped, everything runs together and sounds like mush. After a while this way of playing becomes automatic and you won’t have to think about it, but in the beginning you think about it quite a bit!

The wires are very high tension and they are not pulled like a guitar string. Doing so would cause breakage. For the most part, you lightly draw a nail over a string and a millisecond or so later another finger pad drops down on a previously played ringing string. Eventually you learn to pluck chords and intervals and smoothly damp the previously ringing ones as you progress to the next, all without making the damping sound like an abrupt end to the ringing tones. Or buzzing if you accidentally touch just so.

There are a couple of very good introductory method books that you can start with, if you have access to a wire-strung harp (of any kind). Ann Heymann has published two tutorial books that will get a beginner up to proficiency, although her repertoire is very traditional. Her Secrets of the Gaelic Harp is the one I began with and probably the best one you will find on the subject. This book will make you work very hard but get through it and her follow up one Coupled Hands for Harpers and you should be good. Once you have the basics down you can start to study technique from other harping traditions. For me, it was Yolanda Kondonassis’ On Playing the Harp, a pedal harp exercise book, with lots of beautiful arpeggios.

You’ll probably find your harp to be teaching you just as much as the textbook does. And you may well find yourself modifying the traditional techniques you’ve mastered to suit your own style and your harp. 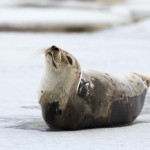 Another kind of harp!